Cabo shark dive is the FIRST SHARK DIVING COMPANY in Baja California Sur, as we started the shark diving operations in Cabo San Lucas. We are the FIRST COMPANY providing shark diving ECO TOURS where the people can safely dive and swim with sharks in their natural environment.

Here at Cabo Shark Dive we are active conservationists and ecologists, we really love sharks, we protect them for real and we put lots of effort into it. Part of our profits goes in concrete CONSERVATION PROJECTS and SHARK TAGGING PROJECTS in collaboration with Mexico Azul Foundation and Pelagios Kakunja. Since 2015 we are monitoring the health of the local shark population gathering datas with HIGH SCIENTIFIC VALUE.

We involve the local fishing communities in ECO TOURISM ACTIVITIES, through donations, training and education we promote ecotourism as a good alternative to fishing. As official Environmental Inspectors of PROFEPA (Federal Attorney for Environmental Protection) we protect the ocean from illegal fishing practices, illegal fishing devices and from any harmful behaviour that could damage the marine ecosystem. We work side by side with governmental entities like SEMAR or CONAPESCA monitoring the sport and commercial fishing activities to make sure everyone respects the fishing regulations and restrictions as well the rules of the Marine Protected Areas.

The Cabo Shark Dive Team has spent countless hours exploring more than 150 nautical miles around Cabo, both in the Pacific Ocean and sea of Cortez. We learned perfectly the behaviour of our local sharks and we discovered all the local shark diving sites. Jacob and his team proudly made Cabo San Lucas one of the WORLD BEST SHARK DIVING DESTINATION! 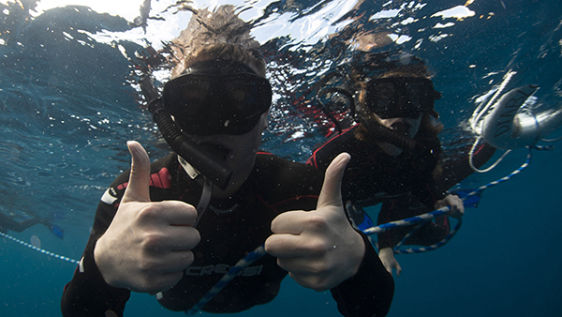 You are in the right place!

The knowledge of the area and the sharks behaviour is the key for a safe and successful shark diving operation: The Cabo shark dive crew members are the best connoisseurs of the area and the local shark species.  All our tours are led with professionalism by highly trained and qualified shark behavioural experts, Padi certified instructors  marine biologists and professional underwater photographers, with many years of experience in the field.
Our professional staff will make your trip fun and educational ensuring at the same time comfort and safety in and out of the water. You will have a once in a life time shark experience regardless your level of experience and  at the same time you will help sharks to worth more alive than dead! 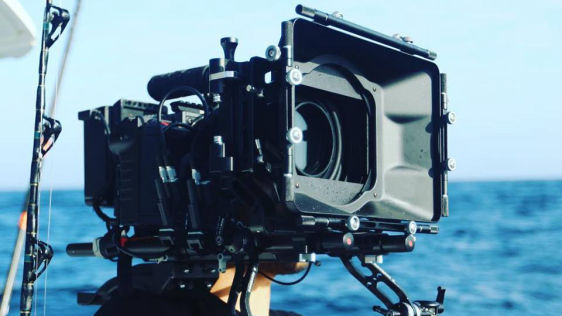 Cabo shark dive has been featured on the world most famous diving magazines and on the  the world biggest tv productions and channels like Discovery channel, National Geographic, SHARK WEEK, Televisa, Animal Planet, Expedition Unknown, BBC. Cabo shark dive proudly host the world best awards winning underwater photographers coming from all over the world as well thousands of amateur and beginners divers. 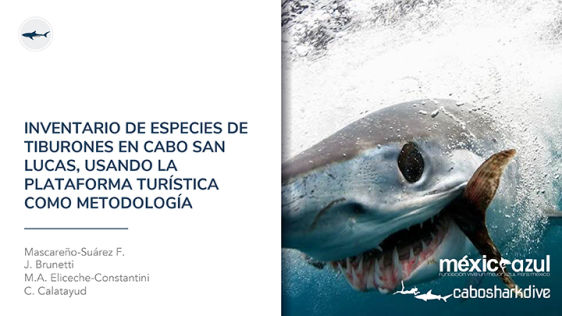 Cabo shark dive is deeply involved in shark conservation, our goal is made the sharks worth more alive than dead by bringing people swim safely with them. and increasing the demand of sharks eco-tourism.
Cabo Shark Dive partners up with MEXCO AZUL FOUNDATION for monitoring pelagic shark’s
population dynamics in the area. The collection of scientific data during shark tours has
allowed us to perform the first formal inventory of species done for Cabo San Lucas, and
to demonstrate the viability of touristic operations and citizen science as tools used for the
establishment of baselines for these populations. Our main species of interest are: smooth
hammerhead shark, silky shark, blue shark and mako shark. Since 2016, we have
performed more than 500 sighting records with more than 150 registers for mako sharks
https://mexicoazul.org 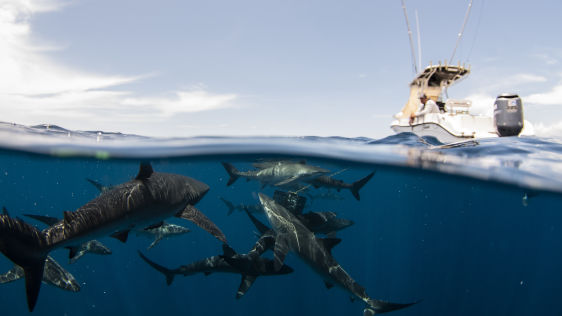 Cabo San Lucas is now the world best and easiest place to swim safely with mako sharks, smooth hammerheads and blue sharks. Our exclusive dive sites are located only 25 minutes boat ride from our dock, for a maximum comfort and safety, and the great water conditions will make the experience even more enjoyable! Cabo is the only place in the world where you can see mako sharks and blue sharks in crystal clear blue water, perfect for underwater photo and videos!

Identify the main species and sex  of oceanic sharks in the area.

Observation of  the behaviour of different species of shark

Identify important concentration points ("hotspots") of sharks and other pelagic species such as preferential habitat of these species in the area, in relation to the distance to shore

Evaluate the capacity and potential of the region as a possible site for shark watching as alternative to fishing, to decrease the fishing pressure in the area

Cabo Shark Dive is managed and operated by Jacopo Brunetti,  founder of Cabo Shark Dive, marine biologist and professional underwater photographer, PADI dive Instructor, shark behavioural expert and professional shark dive, EFR Instructor.  Before founding Cabo Shark Dive, Jacopo worked as biologist, shark dive guide and professional underwater photographer with sharks and large marine animals for 12 years. Throughout this time, he has worked around the world; in South Africa, Egypt, Azores, Hawaii, Mexico, Baja California, Australia & Philippines, collaborating with important institutions such as The Shark Research Lab at The Hawaiian Institute of Marine Biology.
He has been featured on the major tv productions like Shark Week, diving magazines and is the official shark guide of the world best underwater photographers that always require his skills and experience on board. He is also deeply involved in conservation and
With his  knowledge he will focus on your safety and ultimately the safety of the sharks.

Cabo shark dive welcomes and helps students from Universities of La Paz and Pelagios Kakunja to carry out the university thesis about the local shark species and complete their Marine Biology degree. We contribute to raise new generation of marine biologist and sharks lovers!

Collaboration with local communities
We work and support the local communities, especially local fishermen families. The local captains know the area better, during a shark tour they make 5 times the money the make while fishing so they can easily support their families and of course while they work with us they don’t kill any fish! this the best way to change their mind and convert fishing activities in eco-tourism activities. We have established close ties with various fishermen who are now beginning to change their habits and have become a valuable aid to successful expeditions

CABO IS THE ONLY PLACE IN THE WORLD WHERE YOU CAN SWIM AND SNORKEL WITH MAKO AND BLUE SHARKS IN CRYSTAL CLEAR AND WARM WATER, CLOSE TO SHORE!

Cabo San Lucas is now the world best and easiest place to swim safely with mako sharks, smooth hammerheads and blue sharks. Here the Northern California current, the Southern California countercurrent and a strong coastal upwelling work together to create a marine environment with an incredible biodiversity, making CABO SAN LUCAS: THE BEST PLACE IN THE WORLD TO SNORKEL AND FREE DIVE WITH THE SMOOTH HAMMERHEADS (Sphyrna zigaena) WITH MAKO SHARKS (Isurus oxyrinchus) AND BLUE SHARKS (Prionace glauca) and silky sharks (Charcharinus facliformis)

During our shark dive tour, we always look in the surface for PELAGIC ACTION OR BAIT BALLS. We have high chance to jump in the water with other big marine animals like stripped marlin, mahi mahi, wahoo, dolphins, sea lions & other big marine mammals.... everything can show up!

CABO IS THE BEST DESTINATION FOR SHARKS AND BIG MARINE ANIMALS, with the HIGHEST CONCENTRATION OF MAKO AND BLUE SHARKS, this is because we offers world-class shark diving 7 days a week year-round with sharks seen all year round. This location have large numbers of high profile and rare shark species such as Makos, blue sharks, smooth hammerheads and huge schools of silky sharks. Cabo San Lucas has the world highest concentration of mako, blue sharks and smooth hammerheads, close to shore. Cabo is perfectly located at the tip of the Baja Peninsula, making it the meeting place of the Sea of Cortez and the Pacific Ocean.

Our top shark-diving spots are located in both the Sea of Cortez and the Pacific Ocean, within 25 minutes from our dock, most of which we have discovered ourselves. We could show you a map outlining where exactly we would take you, but we want to keep some of the locations secret to ensure that you will enjoy a personalised encounter with the sharks, without having to worry about other boats or tourists!

Further along the coast, but still within driving distance, you can also find an even larger variety of marine life. From whale sharks in La Paz to the marlin migration in Magdalena Bay, the Baja peninsula truly has it all. 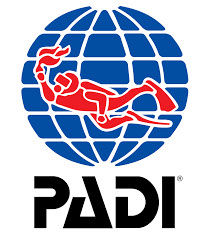 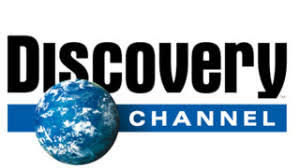